The Spirit of Tequila

Photographs capturing the culture and beauty of tequila, the national spirit of Mexico

Agave dates back to the Aztec civilization as an important crop in Mexico. Since the 1600s, the people of western Mexico have cultivated blue agave from the red volcanic soil that blankets the region, to make what we know as tequila. The Spirit of Tequila celebrates the tradition, culture, and ...

Agave dates back to the Aztec civilization as an important crop in Mexico. Since the 1600s, the people of western Mexico have cultivated blue agave from the red volcanic soil that blankets the region, to make what we know as tequila. The Spirit of Tequila celebrates the tradition, culture, and myth of this iconic drink. Joel Salcido traveled across the state of Jalisco capturing images of distilleries and artisanal tequileras, including blue agave fields at sunset, the agave's pineapple-like centers (piñas), elegantly shadowed barrel rooms (añejos), and, of course, the agave farmers themselves.

Nearly ninety photographs, taken with a medium format camera—some in full-color, some in duotone—reveal not only the tequila making process but also the region’s traditions of culture and religion. Haunting and beautiful, a church spire is juxtaposed with a firework celebration in honor of the Virgen de Guadalupe. A Mexican charro rides through the streets of Arandas. Near Atotonilco, a horse pulls a traditional plow through the fields to irrigate. Exploring the rooms and techniques hidden in the distilleries of legendary tequilas Herradura, Sauza, Jose Cuervo, Don Julio, and others, The Spirit of Tequila celebrates a craft that is rooted deep in the culture of Mexico.

Joel Salcido grew up with one foot in Mexico and the other in the United States, straddling two languages and two cultures. As a staff photographer for the El Paso Times, he documented the Tarahumara Indians of Mexico and covered the 1985 earthquake in Mexico. He has also traveled extensively in Latin America for USA Today. He has received numerous awards, including several for his coverage of life in Cuba and inhalant abuse on the U.S.–Mexico border. His images appear in the collections of the Museum of Fine Arts Houston, the El Paso Museum of Art, the University of Texas Harry Ransom Humanities Center, and the Wittliff Collections at Texas State University. Additional acquisitions have been by the Federal Reserve Bank, the University of Texas at San Antonio, and the University of International Business and Economics in Beijing. Most recently, the photograph Atotonilco el Alto from this book was added to Mexico’s National Art Heritage Series. Salcido lives in Austin.

Paul Salopek is an American journalist. A two-time Pulitzer Prize winner, he was raised in central Mexico. In 2013 he embarked on the “Out of Eden Walk,” a seven-year, 20,000-mile transcontinental foot journey along one of the migration routes taken by early humans out of Africa. Funded by the National Geographic Society, the Knight Foundation, and the Abundance Foundation, the project aims to immerse readers in the lives of nomads, villagers, traders, farmers, and fishers Salopek meets along the way. He previously worked as a reporter for the Chicago Tribune and taught journalism at the Princeton University.

A Montreal native based in New York, Chantal Martineau writes about wine, spirits, food, travel, and culture. Her work has appeared in Vogue, Food & Wine, Saveur, Surface, Departures, the Atlantic, Financial Times, and more. She is the author of the How the Gringos Stole Tequila and the coauthor, with Ron Cooper, of Finding Mezcal: A Journal into the Liquid Soul of Mexico (forthcoming). She lives in the Hudson Valley.

“Ideal as a coffee-table book, this stunning hardcover makes for a great gift, along with a bottle of tequila.” — Liquor.com 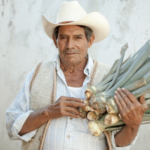