Edited by George B. Hernández Jr. and Karen F. Glenney

The history of a long-serving South Texas medical institution

At the start of the twentieth century, South Texas was a melting of troops training for deployment in World War I and thousands of refugees fleeing the Mexican Revolution. With the influx of immigrants and injured veterans returning from the war, the area was in desperate need of a charity ...

At the start of the twentieth century, South Texas was a melting of troops training for deployment in World War I and thousands of refugees fleeing the Mexican Revolution. With the influx of immigrants and injured veterans returning from the war, the area was in desperate need of a charity hospital to serve the burgeoning community. The city of San Antonio and Bexar County each contributed half the funding to build the Robert B. Green Memorial Hospital, named for a socially conscious county judge and Texas state senator.

The Green hospital filled a critical need and was completed just in time to care for victims of the 1918 flu epidemic. One hundred years later, the hospital is one of many in the University Health System, which continues to fulfill the diverse health care needs of South Texas.University Health System at 100 chronicles the compelling history of a nationally recognized teaching hospital and its network of outpatient healthcare centers with archival photographs and extended captions. Highlights include the 1955 creation of the property tax funded Bexar County Hospital District; the 1968 founding of the University of Texas Medical School at San Antonio; now called UT Health San Antonio; and the 1999 opening of the Texas Diabetes Institute. The book also looks ahead to the next one hundred years as medical advancements and concerns and the needs of the South Texas region continue to evolve. Whatever the future of health care holds, the University Health System aims to continue the mission that has guided it from the beginning—to treat all those in need in the community with compassion, respect and skill.

George B. Hernández Jr. has family roots in Marfa and Presidio, Texas. In 1953 his parents moved to San Antonio’s South Side, where he grew up. In 1977 he received his doctor of jurisprudence from George Washington University Law School. In 1990 he joined University Health System as vice president of legal services and was named president/CEO in 2005.

Karen F. Glenney is from California, where she received her doctorate in sociology from Stanford University. She left academia to pursue a career in political campaigns and public affairs for nonprofits, landing in San Antonio in 1983. She retired from University Health System in 2018 after thirty-one years in several corporate communications roles.

The mayor of San Antonio from 1991 to 1995, Nelson W. Wolff enacted several major economic developments for the city. He is the author of The Changing Face of San Antonio, Transforming San Antonio, Mayor: An Inside View of San Antonio Politics, 1981–1995 and Baseball for Real Men: Seven Spiritual Laws for Senior Players. He currently serves as Bexar County judge. 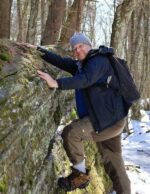