With Wilhelmina Delco and Johnny Limón

East Austin, just across Interstate 35 from Austin, Texas’s capital city, is a historically working-class neighborhood that in recent years has become an arts district and hotbed for real estate developers targeting a young urban population. The shops and restaurants that for decades served Latino and African American residents are ...

East Austin, just across Interstate 35 from Austin, Texas’s capital city, is a historically working-class neighborhood that in recent years has become an arts district and hotbed for real estate developers targeting a young urban population. The shops and restaurants that for decades served Latino and African American residents are being crowded out by coffee shops, cocktail bars, and upscale bakeries hoping to attract newer residents. The resulting tensions, part of a trend debated in cities across the country, have received national media attention.

After years of observing the fragmentation of east Austin’s Latino and African American communities, photographer John Langmore began to chronicle the historic neighborhood and its residents. His aim was to capture the gentrifying neighborhood’s unique nature and to make Texans aware of the people and places negatively affected by the state’s growth.

Fault Lines features more than a hundred color and black-and-white photographs taken between 2006 and 2010, during which time Langmore was fully aware that the window for capturing the east Austin community was rapidly closing. Indeed today many of the neighborhood places, and even the people, have been lost to development and increasing rents and property taxes.

The book features a foreword by Michael King, a longtime political reporter for the Austin Chronicle; essays by east Austin resident Wilhelmina Delco, Austin’s first African American elected official and a ten-term member of the Texas House of Representatives, and Johnny Limón, a sixty-six-year resident of east Austin and a prominent member of the neighborhood’s Latino community; and an epilogue by Langmore.

John Langmore is a photographer and a founding member of the Austin Center for Photography. He took up photography when his corporate job as an attorney brought him to the Far East. In addition to his work in east Austin, Langmore recently completed a five-year project documenting the American cowboy, and his photographs have appeared in two major museum exhibitions, including at the Briscoe Western Art Museum. He has served on the board of Capital Metro and on state, county, and city boards in an effort to influence the way Austin evolves.

Michael King has reported about Austin for thirty years in the Texas Observer and the Austin Chronicle, where he was news editor from 2000 to 2016 and is currently a staff writer.

The Hon. Wilhelmina Delco became Austin’s first Black elected official in 1968 as a member of the Austin Independent School District board of trustees. She later served ten terms in the Texas House of Representatives, during which time she chaired the Committee of Higher Education for twelve years and was also speaker pro tempore. She has four children, nine grandchildren, and two great-grandchildren.

Johnny Limón is an East Austin advocate whose family has lived in the neighborhood since the 1930s. His mother, Eloisa Ojeda Limón, lived in her East Austin home until her passing at the age of 104. Five generations of Limóns currently reside in Austin.

"Langmore focuses on those old ways, rather than on the conflict between the old and new. The East Austin portrayed here is a place of street fiestas, barbershop gossip, and Sunday morning church services, not brewpubs, fancy coffee shops, and limestone-and-brushed-nickel apartment complexes. It's a snapshot of a place that, Langmore writes, 'time will render unrecognizable to future generations.'"— Texas Monthly

“When photographer John Langmore began documenting East Austin about 13 years ago, he could hardly work fast enough to take shots of decades-old establishments before they disappeared... Since he stopped taking photos for the book about eight years ago, Langmore estimates the majority of the places he featured no longer exist or have changed due to increasing rents and property taxes.”— Austin American-Statesman

“This book is a real looker – and is sure to offer some solace to anyone feeling homesick for East Austin.”— Austin Chronicle

"A look back a decade or so at an East Austin that already was disappearing.”— Rivard Report

“Langmore set out to capture that uniqueness on film and caught a changing community in the process. He said the development boom changed the face of the East Austin community, pushing out many families and businesses he captured there.” — Spectrum News Austin

"Fault Lines is not angry or bitter; it's a love letter to a bygone Austin and a reminder of how complex the causes and effects of gentrification can be." — Reason Magazine 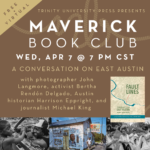