Revolutionary Women of Texas and Mexico

Portraits of Soldaderas, Saints, and Subversives

Much ink has been spilled over the men of the Mexican Revolution, but far less has been written about its women. Kathy Sosa, Ellen Riojas Clark, and Jennifer Speed set out to right this wrong in Revolutionary Women of Texas and Mexico, which celebrates the women of early Texas and ...

Much ink has been spilled over the men of the Mexican Revolution, but far less has been written about its women. Kathy Sosa, Ellen Riojas Clark, and Jennifer Speed set out to right this wrong in Revolutionary Women of Texas and Mexico, which celebrates the women of early Texas and Mexico who refused to walk a traditional path. The anthology embraces an expansive definition of the word revolutionary by looking at female role models and subversives from the last century and who stood up for their visions and ideals and continue to stand for them today. Eighteen portraits provide readers with a glimpse into each figure's life and place in history. At the heart of the portraits are the women of the Mexican Revolution (1910–1920)⁠—like the soldaderas who shadowed the Mexican armies, tasked with caring for and treating the wounded troops. Filling in the gaps are iconic godmothers⁠ like the Virgin of Guadalupe and La Malinche, whose stories are seamlessly woven into the collective history of Texas and Mexico. Portraits of artists Frida Kahlo and Nahui Olin and activists Emma Tenayuca and Genoveva Morales take readers from postrevolutionary Mexico into the present. Each portrait includes a biography, an original pen-and-ink illustration, and a historical or literary piece by a contemporary writer who was inspired by their subject’s legacy. Sandra Cisneros, Laura Esquivel, Elena Poniatowska, Carmen Tafolla, and others bring their experience to bear in their pieces, and Jennifer Speed’s introduction contextualizes each woman in her cultural-historical moment. A foreword by civil rights activist Dolores Huerta and an afterword by scholar Norma Elia Cantú bookend this powerful celebration of women who revolutionized their worlds.

Kathy Sosa is an artist and educator from San Antonio. She received national recognition for her traveling exhibition Huipiles: A Celebration, which debuted at the Mexican Cultural Institute in Washington, D.C., as part of the Smithsonian Latino Center’s 2007 summer season. Her work has been featured on CNN and in Fiberarts Magazine, Skirt!, San Antonio Woman, Country Lifestyle, and Destinations. Sosa and her husband, Lionel Sosa, recently produced the documentary Children of the Revolución: How the Mexican Revolution Changed America’s Destiny, a twenty-part series chronicling the history of the Texas/Mexico borderland.

Ellen Riojas Clark is professor emerita at the University of Texas at San Antonio. Her research examines ethnic and cultural identity and cultural studies topics. She received three National Endowment for the Humanities grants and was cultural director for Maya and Miguel, a PBS program. She is executive producer for the Latino Artist Speaks: Exploring Who I Am series, and her many publications include Multi- cultural Literature for Latino Children: Their Words, Their Worlds; Don Moisés Espino del Castillo y sus Calaveras; and a forthcoming book, Pan Dulce: A Compendium of Mexican Pastries.

Jennifer Speed is a research development strategist in the office of the Dean for Research at Princeton University. She was formerly research professor of religious studies at the University of Dayton, where she specialized in Spanish historical writing and narratives, biography, theology, and law. She has taught Western, world, medieval, and Latin American history for more than twenty years. She served as historian for the award-winning PBS documentary Children of the Revolución and is a co-project director of a major NEH-funded, multiyear project on the African American poet Paul Laurence Dunbar.

Dolores Huerta is a renowned civil rights activist and American labor leader who has worked tirelessly for women’s and worker’s rights. She cofounded the National Farmworkers Association, now known as United Farm Workers, with Cesar E. Chavez, and in 2002 she founded the Dolores Huerta Foundation, which creates leadership opportunities for community organizing, civic engagement, and policy advocacy. She has been honored with the Presidential Eleanor Roosevelt Award for Human Rights, the Presidential Medal of Freedom, and the Radcliffe Medal. She lives in Bakersfield, California.

Norma Elia Cantú is the Norine R. and T. Frank Murchison Professor of the Humanities at Trinity University and a professor emeritus at the University of Texas at San Antonio. She edits the Rio Grande/Rio Bravo Culture and Traditions book series at Texas A&M University Press, and her articles on border literature, teaching English, quinceañera celebrations, and the matachines dance tradition have earned her an international reputation as a scholar and folklorist. Her award-winning book Canícula: Snapshots of a Girlhood en la Frontera chronicles her childhood experiences on the border. She lives in San Antonio.

Lionel Sosa is an independent marketing consultant and a nationally known portrait artist. He has served on the teams of eight national presidential campaigns, on the Texas A&M University System Board of Regents, and on the boards of Sesame Workshop, PBS, and the Briscoe Western Art Museum, and other organizations. He is the author or coauthor of five books, including El Vaquero Real: The Original American Cowboy. Sosa and his wife, Kathy Sosa, recently produced the documentary Children of the Revolución: How the Mexican Revolution Changed America’s Destiny, a twenty-part series chronicling the history of the Texas/Mexico borderland.

"History buffs, look no further! This beautiful volume begins to fill in gaps in collective Texas and Mexico history with eighteen portraits of revolutionary women. Some were soldiers, others were artists, all were badass." — Ms. Magazine

"Offers a feminist take on our state’s history. " — Texas Monthly

"Reclaims names that should be known for history." — San Antonio Express-News

"A revelatory journey about female power in Texas and Mexico." — Southwestern Historical Quarterly

"These women were revolutionaries who changed San Antonio and beyond." — Texas Public Radio

"A multi-genre approach." — San Antonio Report"Military history is often told from a male perspective. But a new book about the Mexican Revolution aims to change that.... Learning and sharing this history is important because, after all, it’s Texas’ history, too." — Texas Standard

"It's a rare and vibrant genre puzzle that mixes non-fiction with personal stories and illustrations to draw the portraits of women who were relevant before, during and after the Revolution." — AL DÍA 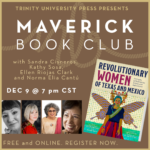