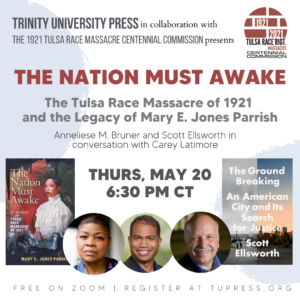 REGISTER FOR THIS FREE EVENT NOW, bit.ly/3naPruf.
Mary Parrish was reading in her home when the Tulsa race massacre began on the evening of May 31, 1921. Parrish’s daughter, Florence Mary, called the young journalist and teacher to the window. “Mother,” she said, “I see men with guns.” The two eventually fled and unwittingly became eyewitnesses to the death of hundreds of Black Oklahomans and the destruction of the Greenwood district, a prosperous, primarily Black area known nationally as Black Wall Street. The Nation Must Awake: My Witness to the Tulsa Race Massacre of 1921 is Parrish’s first-person account, compiled with the recollections of nearly two dozen others, of what is now recognized as the single worst incident of racial violence in U.S. history. Join Trinity University Press in collaboration with The 1921 Tulsa Race Massacre Centennial Commission for a conversation with Anneliese M. Bruner, Parrish’s great-granddaughter and the author of the book’s afterword; Scott Ellsworth, author of Death in a Promised Land: The Tulsa Race Riot of 1921 and The Ground Breaking: An American City and Its Search for Justice; and Carey Latimore, associate professor of history at Trinity University.
To purchase The Nation Must Awake and Ellsworth’s books, shop here, bit.ly/3v6eNw7.