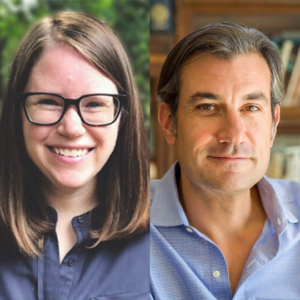 What happens when nuclear bombs, religious visions, disappearing glaciers, and political shifts rocking nations edge beyond science fiction and into reality? Trinity University Press invites you to The End of the World as We Know It: The Nonfiction of Apocalypse, an evening with writers Beth Peterson and Matt Donovan talking about writing into apocalyptic subjects. Moderated by Trinity University Press acquisitions editor, Margy Avery.

A few months after Beth Peterson moved to a tiny village on the edge of Europe’s largest glacier, things began to disappear. The glacier was melting, people she knew vanished, and Peterson, herself, took a harrowing forty-foot fall while ice climbing. Peterson’s effort to make sense of these losses led to travels across Scandinavia, Italy, England, and back to the United States, culminating in Dispatches from the End of Ice, a book that orbits the idea of vanishing and the taxonomies of loss both in an unstable world and in our individual lives.

Matt Donovan’s book, A Cloud of Unusual Size and Shape refers to the volcanic eruption of Mount Vesuvius in 79 AD that buried the city of Pompeii under twenty feet of ash. It’s no surprise, then, that Donovan found the site of the sacred ruins an inspiration, using their legacy to pursue the image of the cloud throughout writing about ruin and redemption. His writing explores the original atomic cloud at the Trinity test site, the same image rising above Hiroshima and Nagasaki, and the childhood memories of nuclear apocalypse in the 1983 film The Day After.

REGISTER for this free, online Zoom event NOW and recieve a code to buy both books at 20% off. bit.ly/3jFX4po